Attack of the Crazy Beavers!

This is the first ever Halloween Book Trail, featuring your favorite YA & MG authors! This trail is based on the YAmazing Race with MGnificent Prizes presented by the Apocalypsies. In THIS trail, you’ll find all kinds of posts, and discover new authors and their work. 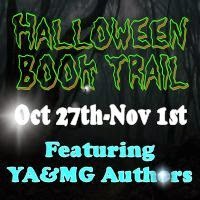 How do you play? Every post contains information that will lead to killer prizes! Books, swag, skype sessions, locks of hair (jk jk)! At the end of each blog you’ll find a link that will take you to the next stop in the trail. By the end, you’ll find a quiz. Now you’ll be happy you read all the posts! Submit your entry to the quiz for a chance to win a grand prize! Accuracy matters here, so take your time, or go back and refresh your memory! One quiz entry per trail. While others on the YA Halloween Book Trail may talk about ghosts, demons and things that go bump in the night, I’m going to riff about creatures that go chomp in the daytime. Yep, beavers. Scary beavers. 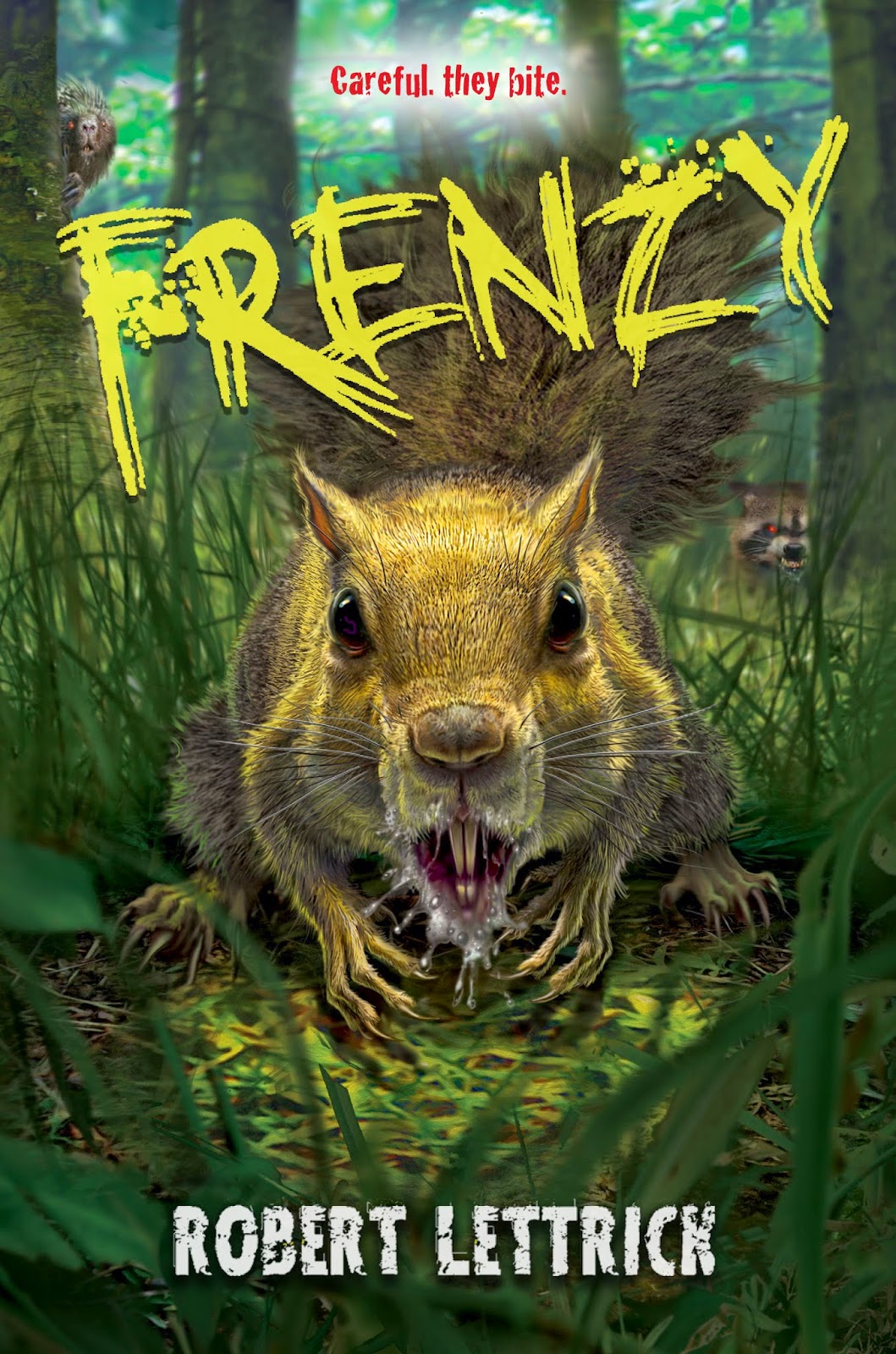 If you've never heard of my book Frenzy, it's about an airborne rabies outbreak in the woods surrounding a summer camp in the Cascade Mountain region of Washington. Even though my books are generally categorized as middle grade horror, I make effort to teach my readers facts about the natural world.  The goal is to give kids the heebie-jeebies while simultaneously instilling an interest in science, ecology, and exploration. Early in the production phase, my editor and I discussed including an appendix at the back of the book titled The Science of Frenzy, but we ran out of time and that plan was scrapped before the book went to press. The supplementary material would have included several pages of additional facts about rabies, including news reports of real life attacks. SPOILER ALERT! There's a chapter in Frenzy that features crazy, rabid beavers. It was one of my favorite scenes to write, and while researching beavers I discovered that they're not quite as cute and cuddly as you might imagine. In fact, they can be downright terrifying when they want to be, and not just in this excerpt from my book:

“Heath!” Emma cried out. “They’re on you!” A half dozen beavers reached the bottom of the dam and set to climbing, hissing, and snorting as they wriggled upward. Another half dozen swam in behind the first wave. Heath didn't know much about beavers, but he’d never associated them with their cousin the rat until now, as their wet, bulky bodies slithered vulgarly across the branches. They grunted at him, baring their sharp, chisel teeth. Strands of lethal saliva stretched between the maxilla and the mandible halves of their jaws. Their wide black eyes were locked on his exposed flesh, eager to tear meat away from his body. Wet and diseased, like the rats throughout history that slipped off  so many boats in so many ports and spread so many plagues across the world.

When I decided to include beavers in Frenzy, the first thing I needed to find out was if they're immune to rabies like possum and rabbits. And since they are susceptible to the virus then the next step was to determine if there had been any documented cases of rabid beavers attacking people, because I sure hadn't heard of any. As it turns out, the northeastern part of the country has been dealing with a bit of a rabid beaver epidemic over the last three years. Well, not really an epidemic. More like a handful of isolated attacks. But that's how these things get rolling, right? 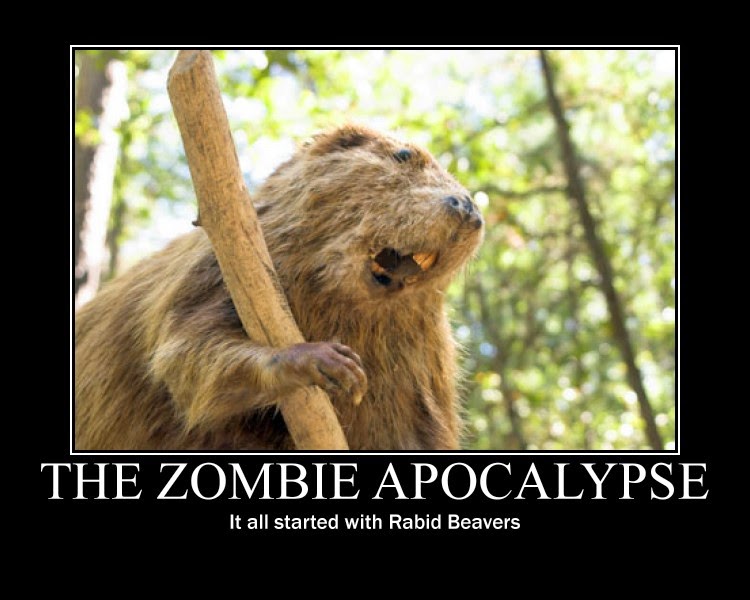 On August 2nd, 2012, a Boy Scout troop leader, 51-year old Normand Brousseau, was swimming in the eastern Pennsylvania portion of the Delaware River when a beaver darted through his legs and bit him in the chest. At first Brousseau assumed it was a carp, but then he realized that his attacker was a giant rodent with chisel-like teeth. Brousseau threw the beaver from his body, but it swam back immediately and bit the man in the legs, arm, hand, torso, and the butt. Brousseau finally managed to clamp the animal’s jaws shut with his hands then he tossed the beaver onto the shore. The animal then attacked a pool noodle, and the scouts seized this opportunity to help their leader out of the water. When Brousseau was safe, the boys picked up rocks and stoned the beaver, quickly killing it. The poor creature’s suffering was over. A day after the attack, a doctor confirmed that the beaver was sick with rabies.

Another attack occurred the year before in a Philadelphia park. A rabid beaver attacked and bit not one, not two, but three people, a couple and a little girl. After each stealthy assault, the animal retreated back into the water and swam away. Eventually, park rangers tracked the beaver down and humanely dispatched it. Its victims were forced to undergo a series of painful shots, but they were otherwise no worse for wear. There have been a few other incidents before and since, but violent encounters with rabid beavers are rare, not nearly as frequent as those involving other rabid woodland creatures, such as bats, raccoon, skunks.

For the most part, beavers enjoy a reputation as industrious, shy animals, but with their chisel-like teeth and sharp claws, they're actually very formidable creatures. Just ask a tree. When a beaver wants to be left alone, it has no problem letting people know. See those teeth? They never stop growing. If the animals didn't wear them down by gnawing on wood, they'd grow straight through their skulls. Even without rabies, beavers have been known to attack if they feel threatened. In 2013, one in Minsk bit a fisherman, slicing an artery, causing the man to bleed to death.

Need more proof that beavers are not to be trifled with? Here you go. (Warning: This is video footage of a beaver charging a cameraman. It's not clear if this particular animal has rabies or if it's just defending itself from a perceived threat. While the attack takes place off screen, this footage isn't for the faint of heart.)


It's clear that when a beaver is upset it can be pretty in-your-face about it, which is even more terrifying when you consider that the beaver is the world’s second largest rodent, only smaller than the capybara, a close relative of the guinea pig and rock cavies. We should all be thankful that capybaras aren't roaming the sewers and subways like their mutual cousin, the rat.

Now imagine walking through the woods and stumbling upon a beaver dam half a mile wide. Beavers have more impact on their environment than any other creature aside from man. Their dams can change the direction of a river or turn one into a pond. They fell trees and clear out large swaths of forest to accommodate their needs. They often requiring great tracts of land. For example, the world's largest dam takes up a lot of real estate in Alberta Canada. In fact, you can see it from space.

And here's a random creepy fact. When beavers talk to each other, they sound sort of like people with duct tape over their mouths. Here, take a listen.

But the point of this blog is not to paint beavers as some kind of bucktoothed super villain. Sure, they can make things difficult for humans, but they're a keystone species, important to the environment for their impressive land development skills. It's simply good sense to show the animal respect and avoid interfering with their grand work. Beavers want to be left alone, so if you ever stumble upon one in the wild, you'd best keep that in mind.

If you want to learn more about the dynamic beaver then pick up Frenzy now. And my new novel, The Murk, arrives in stores this April. Set in the Okefenokee, The Murk is full of creepy facts about the largest black water swamp in North America. It's available for pre-order. 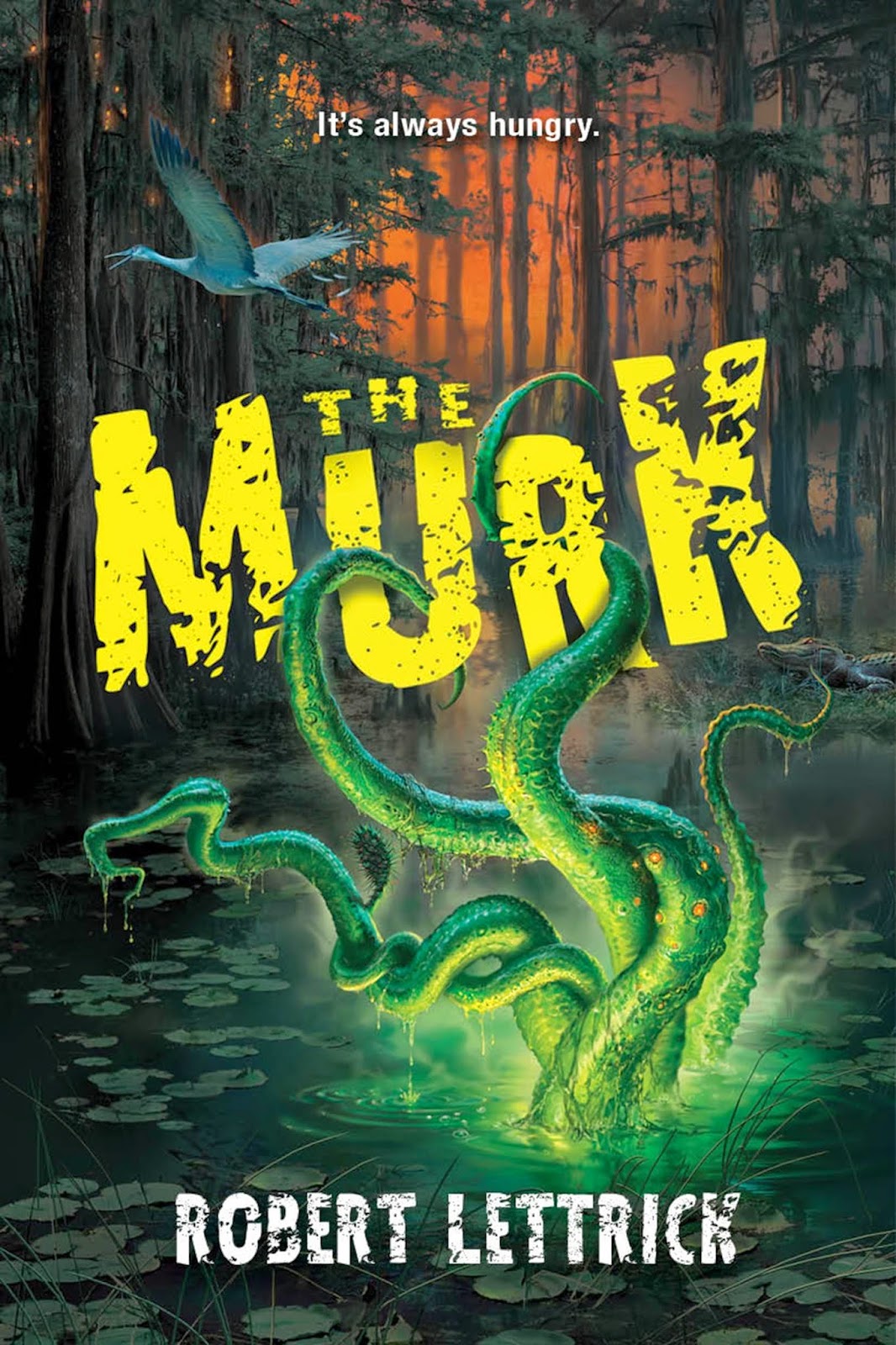 Now off you go, continue on down the path. Don't dawdle. The incomparable SJ Kincaid has prepared something special for your arrival! Just remember to avoid any foaming-mouthed critters you may find along the way. Good luck and Happy Halloween!

Posted by Robert Lettrick at 6:22 PM

Robert Lettrick
Writer of childrens books for Disney-Hyperion. Frenzy and The Murk are in bookstores now. Represented by Lauren MacLeod of the Strothman Agency.